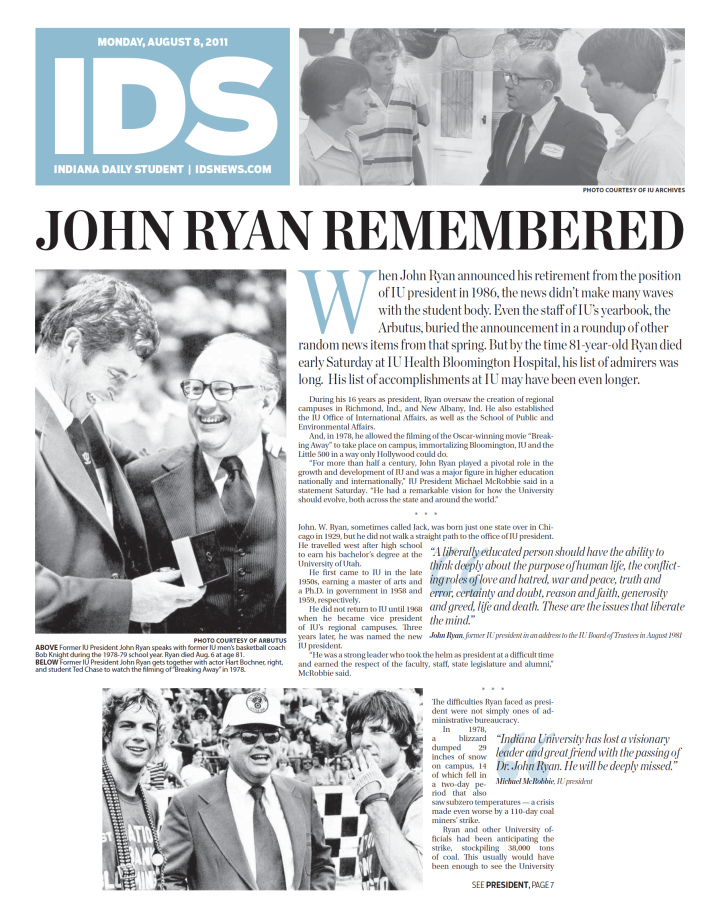 When John Ryan announced his retirement from the position of IU president in 1986, the news didn’t make many waves with the student body. Even the staff of IU’s yearbook, the Arbutus, buried the announcement in a roundup of other random news items from that spring.

But by the time 81-year-old Ryan died early Saturday at IU Health Bloomington Hospital, his list of admirers was long. His list of accomplishments at IU may have been even longer.

During his 16 years as president, Ryan oversaw the creation of regional campuses in Richmond, Ind., and New Albany, Ind. He also established the IU Office of International Affairs, as well as the School of Public and Environmental Affairs.

And, in 1978, he allowed the filming of the Oscar-winning movie “Breaking Away” to take place on campus, immortalizing Bloomington, IU and the Little 500 in a way only Hollywood could do.

“For more than half a century, John Ryan played a pivotal role in the growth and development of IU and was a major figure in higher education nationally and internationally,” IU President Michael McRobbie said in a statement Saturday. “He had a remarkable vision for how the University should evolve, both across the state and around the world.”

John. W. Ryan, sometimes called Jack, was born just one state over in Chicago in 1929, but he did not walk a straight path to the office of IU president. He travelled west after high school to earn his bachelor’s degree at the University of Utah.

He first came to IU in the late 1950s, earning a master of arts and a Ph.D. in government in 1958 and 1959, respectively. He did not return to IU until 1968 when he became vice president of IU’s regional campuses. Three years later, he was named the new IU president.

“He was a strong leader who took the helm as president at a difficult time and earned the respect of the faculty, staff, state legislature and alumni,” McRobbie said.

The difficulties Ryan faced as president were not simply ones of administrative bureaucracy.

In 1978, a blizzard dumped 29 inches of snow on campus, 14 of which fell in a two-day period that also saw subzero temperatures — a crisis made even worse by a 110-day coal miners’ strike. Ryan and other University officials had been anticipating the strike, stockpiling 38,000 tons of coal. This usually would have been enough to see the University through a normal winter.

But, with the unexpected extreme conditions, the University found itself burning nearly 500 tons of coal a day.

In an effort to conserve energy, elevators and escalators were shut off, as were electric hand dryers, ventilation fans and coolers, which refrigerated campus water
fountains.

The heating in some campus buildings was forced to stay in the low 60s and lights in many classrooms with windows remained off.

Things continued to get worse. With talks between mine owners and striking workers falling apart, the University needed to reduce its energy use by an impossible
50 percent.

Ryan approved an order for an emergency recess, and IU was closed for three weeks in March until a deal was finally made after spring break.

More trouble was ahead for Ryan in the coming months.

Read the rest of this story at the Indiana Daily Student.