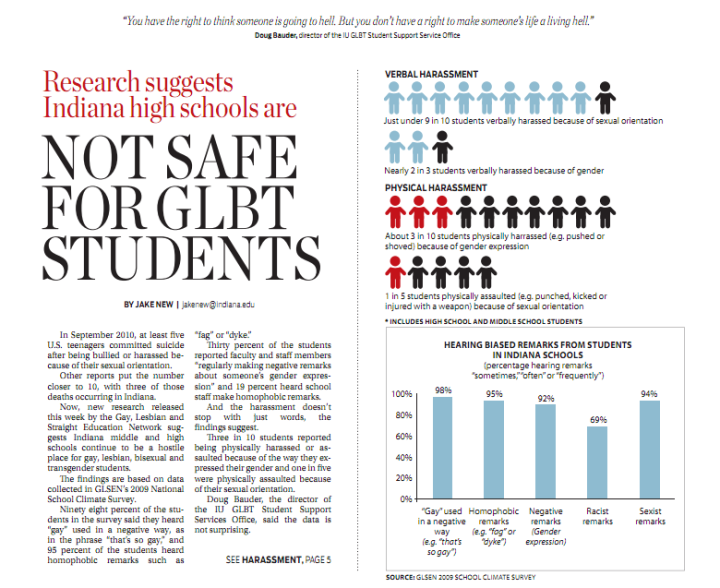 In September 2010, at least five U.S. teenagers committed suicide after being bullied or harassed because of their sexual orientation.

Other reports put the number closer to 10, with three of those deaths occurring in Indiana.

Now, new research released this week by the Gay, Lesbian and Straight Education Network suggests Indiana middle and high schools continue to be a hostile place for gay, lesbian, bisexual and transgender students.

The findings are based on data collected in GLSEN’s 2009 National School Climate Survey.

And the harassment doesn’t stop with just words, the findings suggest.

Doug Bauder, the director of the IU GLBT Student Support Services Office, said the data is not surprising.

“We’re making progress, but it’s not state-wide,” Bauder said. “You talk to students who come here from other places in Indiana and it’s a remarkable contrast.”

Bauder said GLBT students may have a particularly hard time in some smaller towns or more religious areas. He said these communities do not need to change their religious beliefs to make the students more comfortable, however.

“You have the right to think someone is going to hell,” he said. “But you don’t have a right to make someone’s life a living hell.”

Read the rest of this story at the Indiana Daily Student